In light of the virus, the contest is cancelled for this year

In 1958, the LGCF was first among members of the National Garden Clubs, Inc. to sponsor a state wide “Cleanest City Contest.” The aim of the contest is to instil﻿l civ﻿ic pride in the individual citizens and thus, improve the appearance of towns and cities. Each year competition has become stronger, and the cities and ﻿town﻿s have achieved higher and higher standards of cleanliness. We point with pride to the many participating communities through the years – and to the ever-increasing number who work year round to keep their communities clean and beautiful.
Biodegradable products sources:
Eco-Products
​Web Restaurant Store 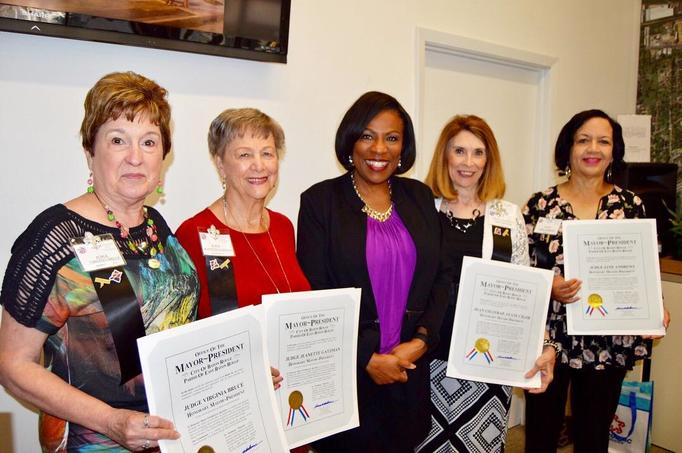 The Louisiana Garden Club Federation (LGCF) recently declared the Town of Jean Lafitte to be the cleanest city in its population group in the state of Louisiana for 2018.  The town had earlier competed at the district level, won that category, and went on to compete at the statewide level.  The judging is done by unbiased garden club members who do not belong to the same district as the city or town being judged.  This award marks the seventh such win for the Town of Jean Lafitte in the past eight years.  Pictured from left to right are Cindy Baucum (Treasurer of Better Swamps and Garden Club), Joe Baucum (President, BSGC), Nicole Cooper (Town of Jean Lafitte employee), Lena Bateman  (LGCF President), Tim Kerner (Mayor, Town of Jean Lafitte), Jean Gilstrap (LGCF Cleanest City Contest Chairperson), and Reba Mackey (LGCF District II Director).  Bateman and Gilstrap both praised the garden club and the town for their efforts to beautify the town and to make it a clean and enjoyable place to live.  In addition to the award for the town, the LGCF officials received Certificates of Merit from Jefferson Parish President Mike Yenni and copies of resolutions from Jefferson Parish Councilman Ricky Templet.
​

When the Jefferson Parish Council met on the Westbank of Jefferson Parish on June 6, 2018, Councilman Ricky Templet passed a resolution praising the three towns/cities within his district (Grand Isle, Jean Lafitte, and Gretna) that either won their population category or placed highly in the competition.  Not to be outdone, Councilwoman Jennifer Van Vrancken passed a resolution for presentation at the Eastbank council meeting on July 27 equally praising Metairie and its CCC Coordinator for its Third Place achievement in heavy competition. Jefferson Parish President Mike Yenni also issued a Certificate of Merit for the occasion.  Shown above (second from the left), Councilwoman Van Vrancken presented the resolution to Katherine Costanza (center), Deputy Director of Jefferson Parish Environmental Affairs Department and also Coordinator of Keep Jefferson Parish Beautiful.  Looking on (far right) was Mary Jacobs, Former President of Louisiana Garden Club Federation (LGCF), and (second from right) Reba Mackey, Director of District II, LGCF.  Looking on (far left) was Joe Baucum, President, LGCF Environmental Consultants Council.  Councilwoman Van Vrancken praised the good work and encouraged the group to win first place in 2019.

A "Thank You" from Rayne LA

Ms. Jean I thought that you would like a copy of our local Newspaper with your picture and the article about the Cleanest City Contest. I want to personally thank you and your wonderful dedicated associates that work so hard at making this ongoing (60 Year Organization) shine Bright for Louisiana. Dedication and Love for Louisiana stands out year after year ! Thanks again for being the person you are and for All you do for Louisiana ! Bravo on a job again well done ……..  Chuck, Robichaux, Mayor, Rayne LA