LIVE OAK REGISTRATION FORM
​Form is in Word, you may need to enable printing

Basic Care of a Live Oak
To become a member, a live oak must have a girth (waistline) of eight feet or greater.
Girths over 16 feet are classified as centenarian.

There is nothing more beautiful than an ancient Live Oak........ 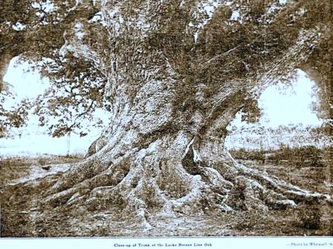 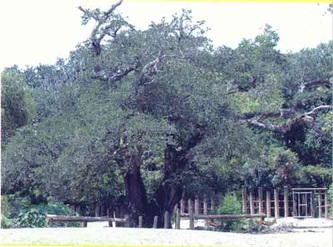 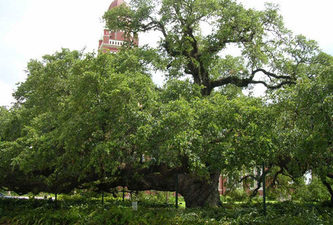 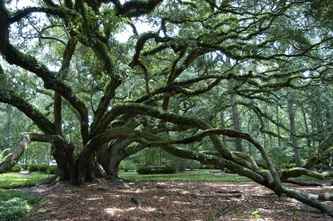 Another view of this Majestic Live Oak - Seven Sisters Oak #200 Lewisburg, LA - Current president of LOS - This oak is the National Champion on the National Register of Big Trees. © Patrick Burke 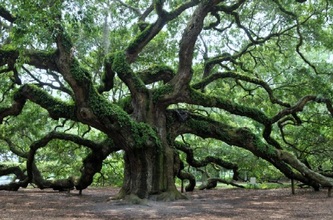 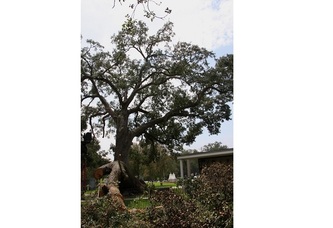 The "RED CHURCH OAK", #671, split in two in August, 2012. It was registered during the 200th anniversary celebrations of St. Charles Borromeo Church Parish in Destrehan. It is believed that the rest of the oak can be saved. This oak was cut down in 2013 by the pastor of St. Charles Borromeo, Fr. Tom McCann, and the world has lost another historical tree. 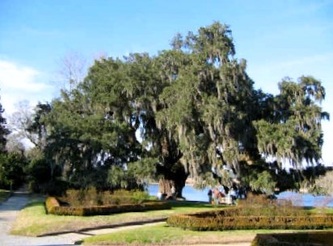 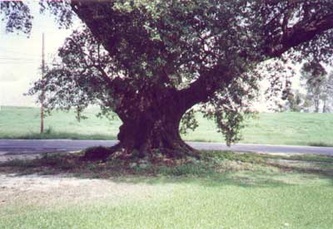 THE LAGARDE OAK #2120 Third Vice-President of the LOS - Luling, LA 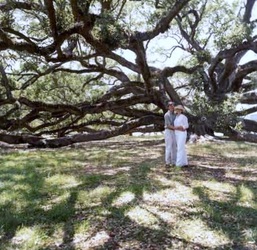 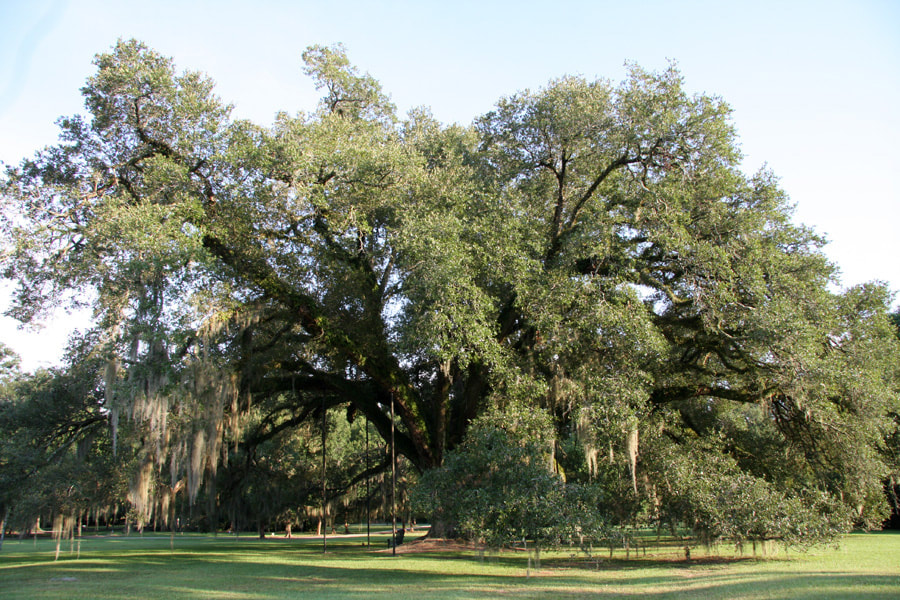 The Abbot Paul Schaueble Oak #2464 St. Joseph's Abbey, St. Benedict, LA. According to Br. Gabriel Rivet, on Nov. 13, 1957 at midnight a powerful storm went through St. Joseph's Abbey in Covington blowing out many of the windows in the church and strewing the pipes in the massive pipe organ into the walls like daggers. The mid section of the Oak was wiped out and a sizable split incurred. Fr. John LeBlanc, a Benedictine monk, refused to cut the tree. Instead he secured it with bolts and heavy braces and it still thrives today, depicting the true spirit of resiliency of the live oak. © Coleen Perilloux Landry 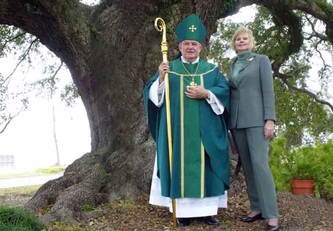 THE MONSIGNOR JEAN EYRAUD OAK # 3054 Reserve, LA was blessed by New Orleans Auxiliary Bishop Roger Morin. With the Bishop is Coleen P. Landry, Chairman of LOS. The Tree is named for a French born priest who served as pastor at St. Peter's Church for half a century. The Archdiocese of New Orleans is seeking to have Msgr. Eyraud beatified for sainthood. The tree lives in a corner of St. Peter's Cemetery. 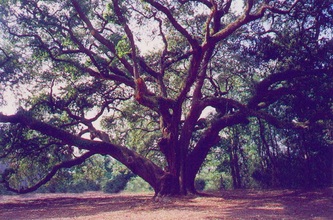 OLD DICKORY #4205 was saved from destruction in 2003. In a campaign led by the Live Oak Society, a LA highway project was redesigned, a U. S. Army Corps of Engineers; drainage project was restructured and a land developer's plan for a subdivision was revised. Never have so many agencies worked together so completely in such a short time to save a historic tree. Because of OLD DICKORY the LA DOTD has begun mapping the registered live oaks to prevent future conflicts with roadways. Jefferson Parish is also mapping the registered oaks and is now the trustee of OLD DICKORY which was donated to the public trust by the land developer. This is setting a precedent for other states who are studying Louisiana's plan. © Coleen Perilloux Landry 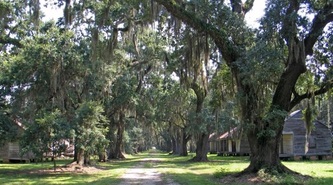 LIVE OAK ALLEE at Evergreen Plantation in Edgard LA. Twenty-two of the original slave cabins remain as a part of its history. © Coleen Landry 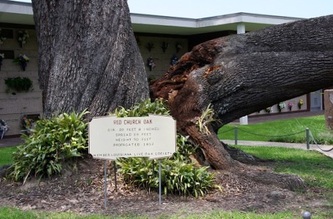 Trees with splits in the trunk are susceptible to this because water can collect in the crotch of the tree and over time, the weight wins out. 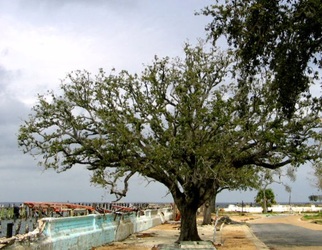 "The tidal surge of Katrina destroyed everything in its path at West End in New Orleans, restaurants, fishing piers, and the marina with its millions of dollars of fishing boats and sailboats. However, Katrina could not destroy the valiant live oaks at West End, which is why the live oak is considered "the hurricane oak" noted for its ability to withstand high winds and its ability to save and protect people who climb into its branches during hurricanes." © Coleen Perilloux Landry 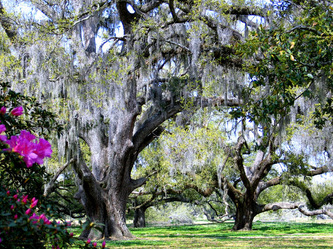 The ancient live oaks of City Park are putting on their new greens. There are over 1000 live oaks in New Orleans City Park and 249 of them are registered with the Live Oak Society. It is said to be the largest live oak grove in the world. Submitted March 2007 © Coleen Landry 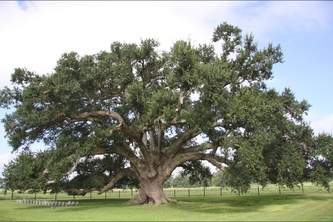 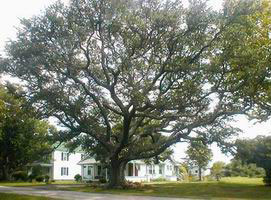 NANNY'S OAK # 4819 was named in honor of Lucille Nelson Lewis in Carteret County, Marshallberg, NC. Girth is 17 ft. 9 in. History proves that at least six generations of the Lewis family have played in and under this oak. It served as a gathering place for friends and neighbors in the evening and its branches held a large swing. During Mrs. Lewis' funeral the pastor referred to her and the oak as being neighborhood landmarks. The oak tree belonged to Mrs. Lewis'; ancestors beginning in the 1800's. 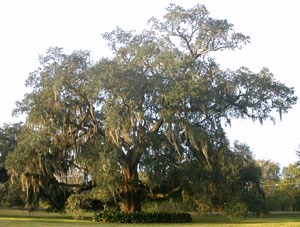 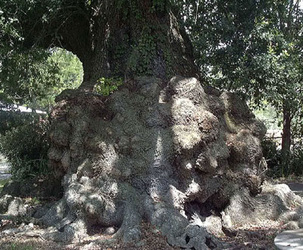 THE JERRY LEE MARTIN LIVE OAK #4968 resides in Maringouin, LA and is a living memorial to the young woman for whom it is named. It has a girth of 33 ft. and is one of the largest trees in the Live Oak Society. 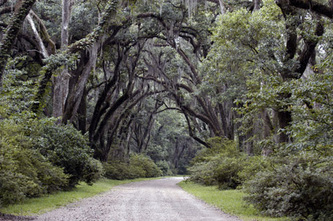 The curved allee' of live oaks at Afton Villa in St. Francisville, LA is draped in Spanish moss. The magnificent house that was on the grounds burned but Mrs. Gen Trimble has established gardens among the ruins. © Patrick M. Burke 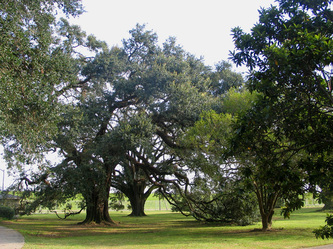 THE BEAUTIFUL OAKS OF CARVILLE Located in the town of Carville, LA along the Great River Rd. is the place known the world over as "Carville", the only place of its kind in the continental U.S. Built by the State of Louisiana for leprosy patients in 1894 it is still a place where one can experience the pain, joy and love that occurred there in the years of treatment and research. It was staffed by doctors of the U.S. Public Health Service and the nuns of the Daughters of Charity during its busiest days. There are still patients living at Carville and USPHS staff caring for them. A cemetery on the grounds tells the story of the lives of the people who were stricken with the disease and who lived and died at Carville. Great strides have been made in medical research of leprosy since the hospital was opened in 1894 and it is no longer the incurable disease it once was. 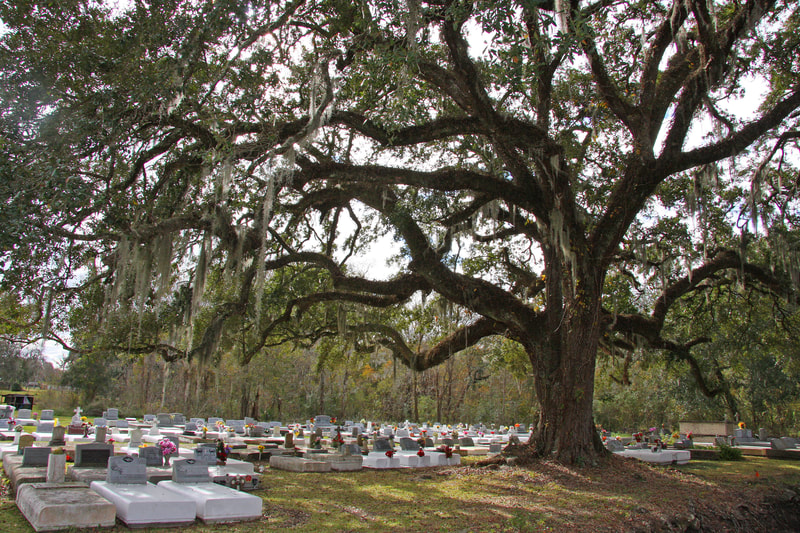 Members of the First Families of Louisiana rest in peace under this Live Oak in the Mennonite Cemetery along the Old Spanish Trail in Des Allemands, Louisiana in St. Charles Parish. (photo by Coleen Perilloux Landry) 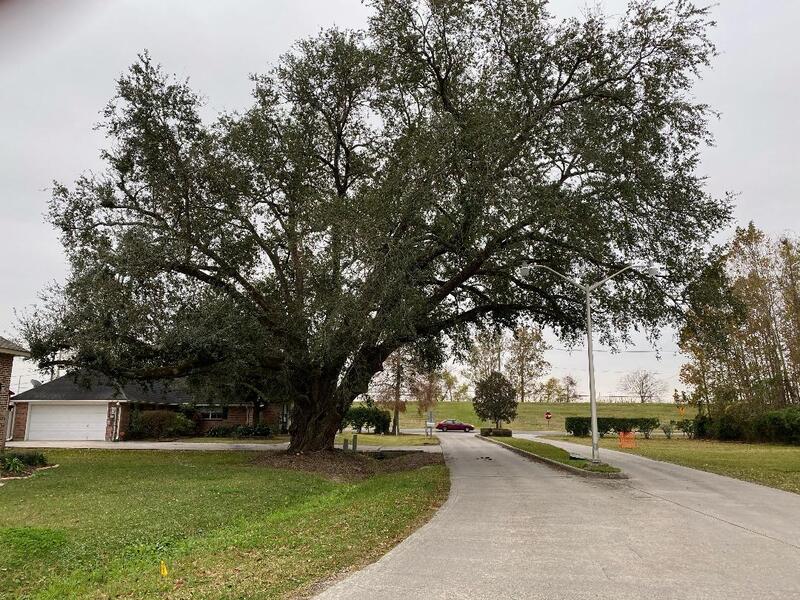 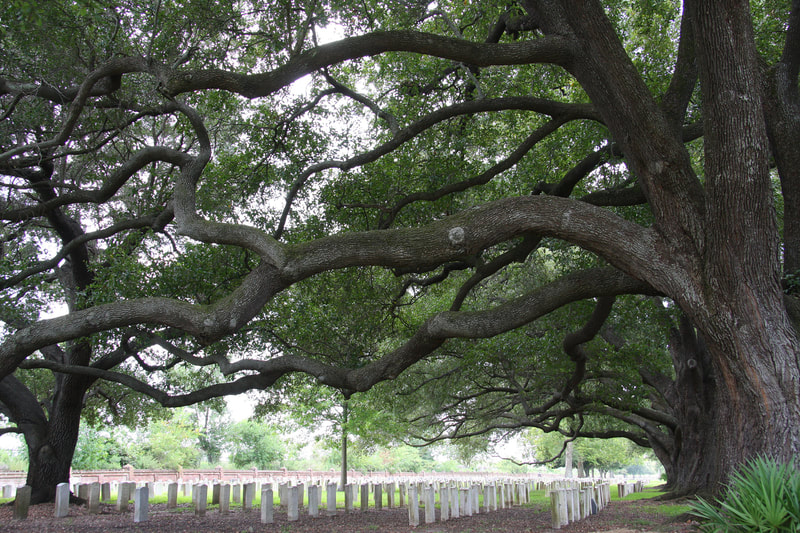 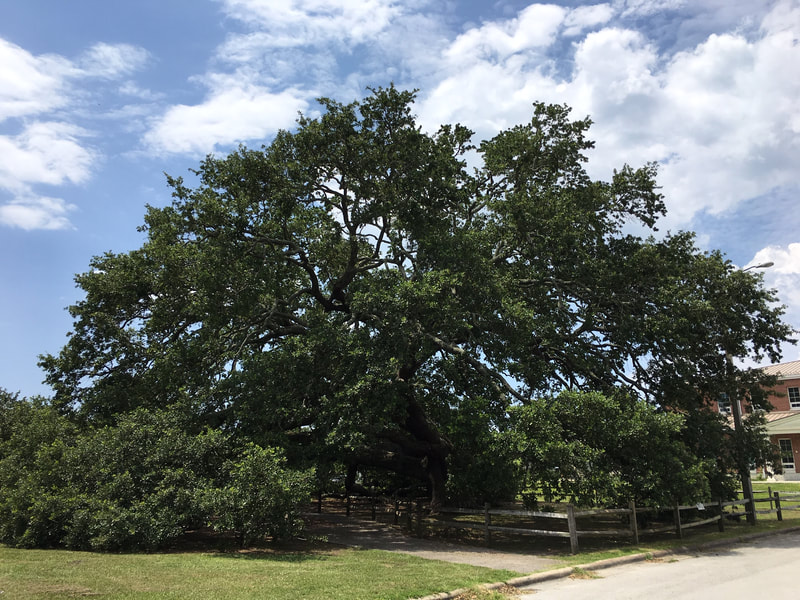 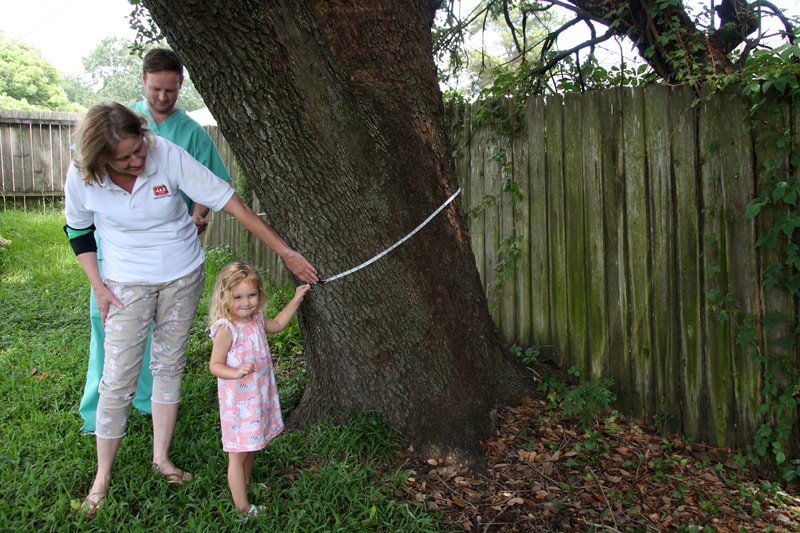 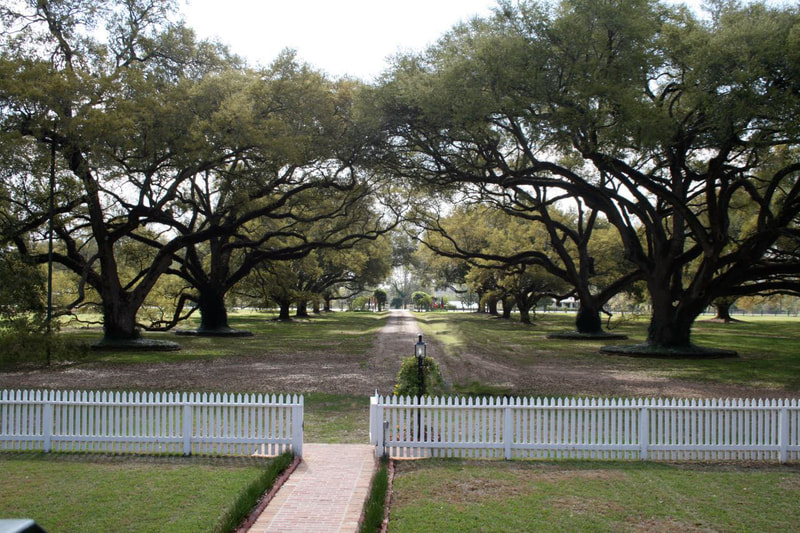 Some of the registered oaks on Cherokee Plantation in Natchitoches, LA, # 7934-7952. Owned by the family of Murphy Oil Company 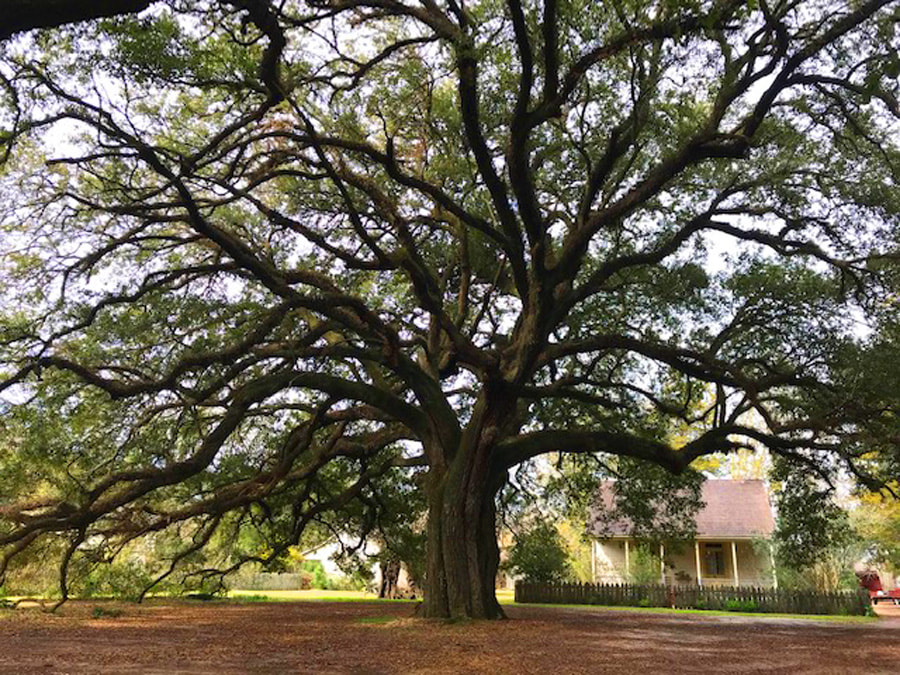 #9300 Pepere Jack in Jarreau, Louisiana in Pointe Coupee Parish It is 20 feet in girth.