LGCF President Linda Finley, Lake Charles Garden Club, gave an overview of the problems in her area and the effects of the pandemic on regional and national club events. She introduced Clara Earl and Ruth Delhomme, Baton Rouge Garden Club, who told of the programs and speakers planned for the April 26-28, 2021 state convention to be held in Baton Rouge.

Darlene White, Denham Springs Garden Club, introduced the guest speaker Krista Adams, who gave a powerpoint presentation on Purple Martins, which showed in nest camera footage of the nesting cycle of the birds. She mentioned the life span and migration habits, covering the species in depth. Adams is a Louisiana Master Naturalist and program manager at Louisiana State University.

Nationally known daylily hybridizer Ronnie Rossie of Hammond spoke on “The Wonderful World of Daylilies” to the Gardenettes at their October 14 meeting held at the Strawberry Board Building in Memorial Park. Being a small group, the garden club was able to safely distance themselves for the event.


A longtime member and immediate past president of the North  Shore Daylily Society, Rossie shared some of his techniques for cross pollenating and propagating from proliferations, the small plantlets that form on the end of some flower stalks. Methodical record keeping and scheduled fertilizing are needed to maintain Rossie’s award winning blooms. Ronnie brought some of his plants for the club members.


Vicky Fannaly opened the meeting; Sandra Haro presented a gift to Sonya Avery, immediate past president for her two years of service. Recording secretary, LeBlanc read the minutes from the September Zoom meeting, and Ellen Pusey gave the treasurer’s report.


Hostesses for the event were Marilyn Wright, Jamie LeBlanc and Pat Walsh. Roll call gave everyone an opportunity to say something about Autumn, either a memory, thought or what they were planting. The club welcomed returning member Dottie Boudreaux.


The floral exhibit was “Fall Madness” a designer’s choice of wild flowers, using fresh or dried material. Anna Poland won for her mixture of colors and textures. A plant exchange gave members a chance to swap and share the things they grew.


Make a Difference Day chairman Carol McGough noted that law enforcement was a big difference maker in the community, so something was planned to honor them for this national celebration. Karen Moran volunteered to help her.


Hostesses for the November meeting are Pusey, Avery and Margaret Hardin. The hostesses will decide on the meeting place. Guest speaker will be John Grimm, a national authority on camellias and owner of Camellia Heaven, which boasts acres of landscaped camellias.

Carolyn Todd, District VI Director for the Louisiana Garden Club Federation Inc., installed the incoming Gardenette officers for September 2020 to May 2021 at the club's September 9 meeting held on Zoom. Using favorite garden tools, she used each to describe the tasks of each position.

Fannaly opened the meeting with a roll call where each member was asked to share a pleasant memory or an update on how they were coping with the pandemic. Bruce recited the collect and presented an opening prayer. Pusey sent a treasurer's report.

A discussion was held regarding future meetings pending the Governor's projections. Some options were outdoor gatherings, more zoom meetings and distanced indoor arrangements.

Measuring the Luke-James Oak at 244 N. 5th Street are Margaret Hardin, Gardenette Live Oak Chairman, and Kathy Bedenbaugh, Representative at Large for the Louisiana Garden Club Federation Inc. The senior tree will be listed in the state registry.

The large live oak tree across from the Post Office on N. 5th Street, was measured by the Gardenettes and found to be in the Centenarian class which includes trees over sixteen feet in girth. Owned by Parker Layrisson, the tree is to be named Luke-James after his sons.

Registration in the Louisiana Garden Club Federation Inc. (LGCF Inc.) is an honor for any tree over eight feet in circumference. The Luke-James Oak was registered and will join the 9,153 senior trees in the state registry, according to Margaret Hardin, local Live Oak Chairman. Assisting her in the process were Vicky Fannaly, Gardenette president, and Kathy Bedenbaugh LGCF, Inc. Representative at Large.

Gardenettes are members of District VI, LGCF Inc., Deep South Garden Clubs Inc., and National Garden Clubs Inc. Coleen Perilloux Landry is the state Live Oak Chairman.
Named Luke-James Oak after his sons, Parker Layrisson noted: "​As you can see from this photo of Luke climbing the roots, my boys love this tree. We are so excited that this beautiful centenarian will bear their name in the registry." 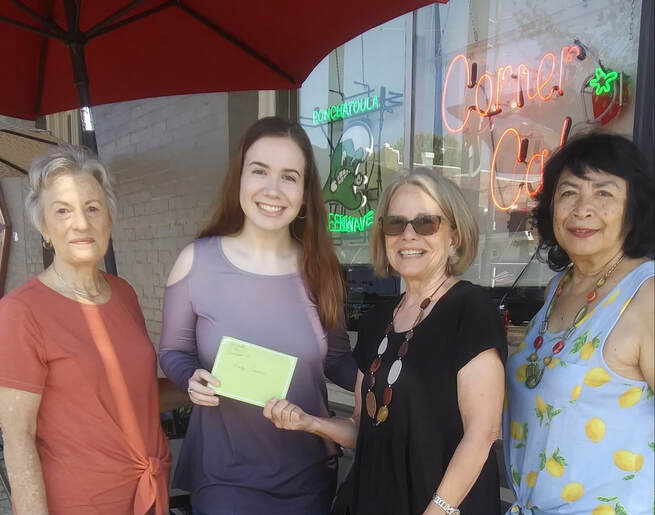 Gardenettes presented Haley Faciane, a Ponchatoula High School graduate of 2020, with a scholarship for her excellent achievements. She is currently enrolled at Louisiana State University in Agriculture. Pictured are Sandra Haro, garden club vice president, Faciane, Anna Poland, club scholarship chairman, and Vicky Fannaly, club president.
​
Haley Faciane was awarded a $500 scholarship by the Gardenettes Tuesday at the Corner Cafe, according to Anna Poland, chairman of the garden club scholarship committee.

The club raises money through raffles and bake sales. To qualify, the student must be a member of the Ponchatoula High School Future Farmers of America (FFA) and maintain a good grade average. Gardenettes are members of District VI, Louisiana Garden Club Federation Inc. and the Deep South Region, National Garden Clubs Inc.


Faciane attended Ponchatoula High School, where she finished her senior year with a 3.5 GPA. She has been an active agriculture and FFA student since her freshman year. While a member of the Ponchatoula High FFA Chapter, Haley competed in the Prepared Public Speaking LDE, placing second, and the Land Evaluation CDE. She also represented Louisiana at National Convention in the National Chapter Award as a presenter for a Top 10 chapter two years in a row.

She served as her chapter’s reporter as a sophomore, and secretary in her junior and senior year. She also served as the Area IV Federation Reporter. Faciane is currently a freshman at Louisiana State University where she is majoring in crop science. She has also been awarded a scholarship from the Ponchatoula Strawberry Board this year, as well as the Lela scholarship.

National Garden Week, June 7-13, is being observed by the Gardenettes, according to Carol Borgstede McGough, chairman.

The club is joining National Garden Clubs Inc. members across the country to celebrate objectives of beautification, education of environmental efforts, gardening, and involvement in our community. This week is an opportunity to encourage pride in your community, interest new members, and work with other groups to be part of those efforts, she said.

McGough added that due to the unusual circumstances we face, there will be no presentation. However, she wanted to encourage awareness of the benefits of gardening like reducing stress, physical fitness, increased Vitamin D from sun exposure, and the pleasure of growing your own food and flowers.
​
Gardenettes are also members of District VI Louisiana Garden Club Federation Inc., Deep South Garden Clubs as well as NGC Inc.

A member of the club for 40 years, Fannaly has served as president twice in the past. She is the third Fannaly to serve in this position, the others being her mother in law Ruth Fannaly and aunt Frances Fannaly. She serves as webmaster for the Louisiana Garden Club Federation Inc. She is a member of the LGCF Circle of Roses and was awarded the silver tray for floral design in 1988 in the Maude Viskell competition.
​
The officers will be installed September 9 during their first meeting of the calendar year at the Strawberry Hut in Memorial Park. Founded in 1942 and federated in 1943, the Gardenettes are members of District VI LGCF, Deep South Garden Clubs Inc. and National Garden Clubs Inc.