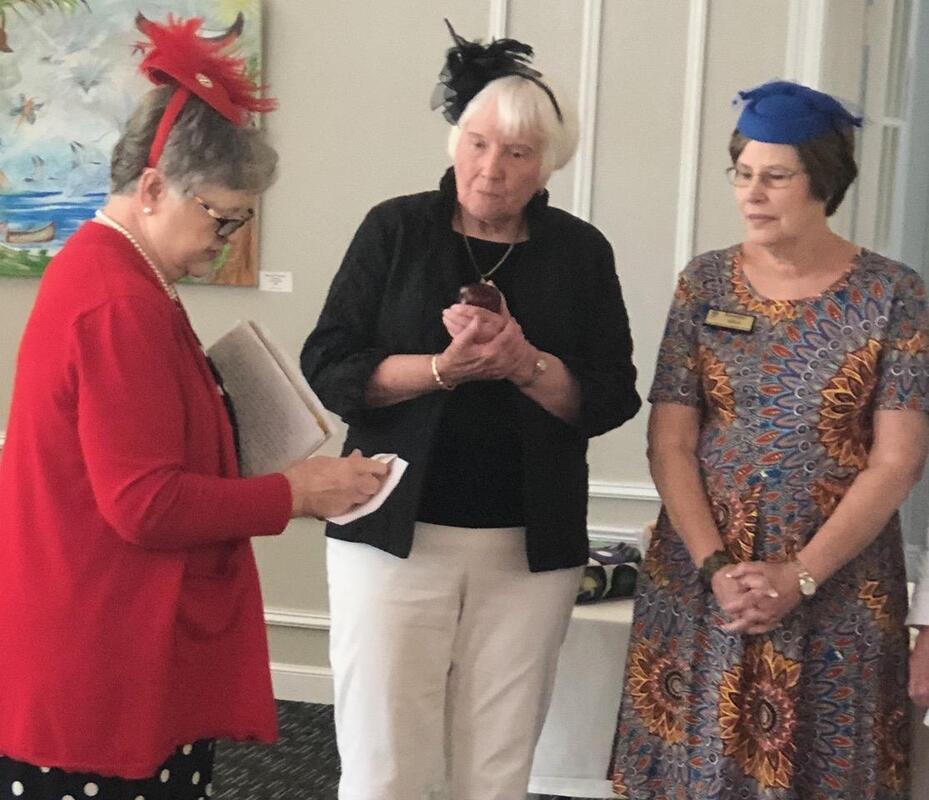 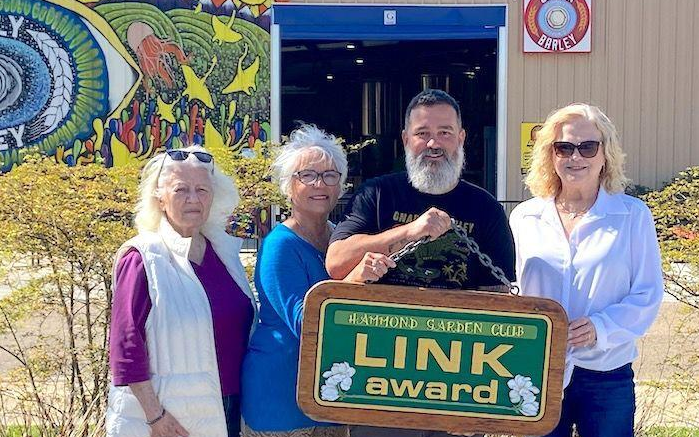 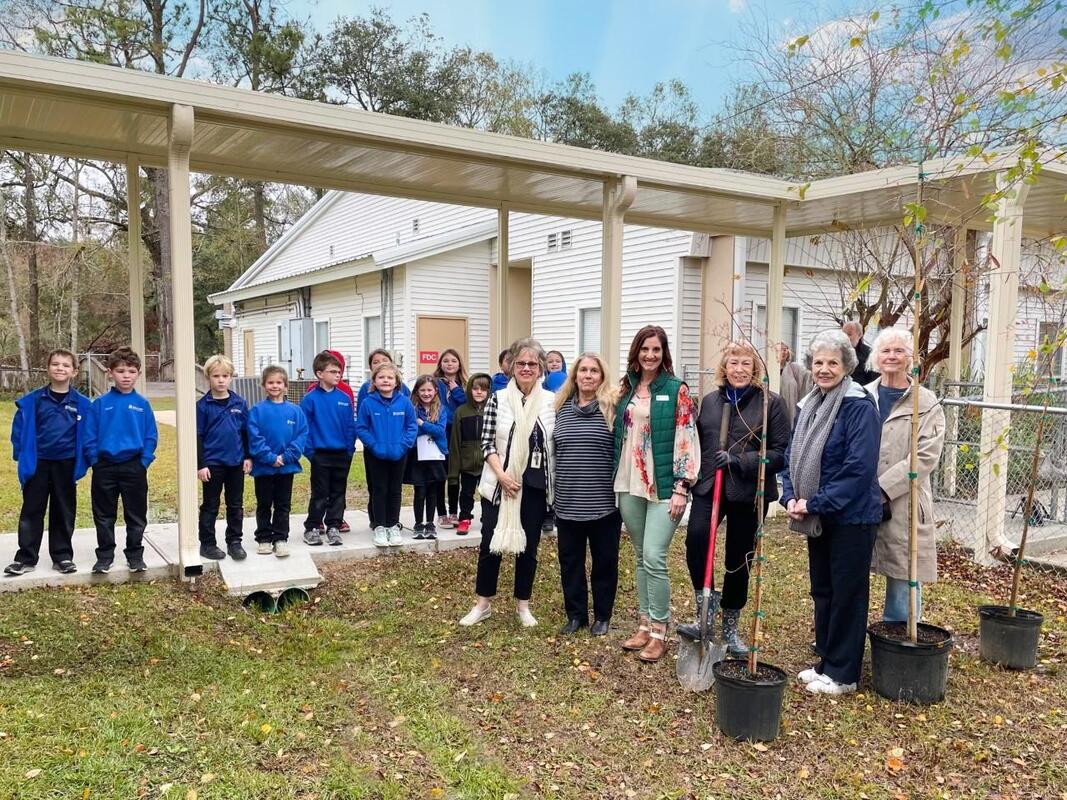 On a very cold day in January five members of the Hammond Garden Club, shovel and three trees in hand, made their way to Courtney Christian School on Robin Hood Drive to celebrate Arbor Day with the children from Mrs. Howell’s second grade class. They were met by Mrs. Sue Courtney that is Head of School and Principal Dr. Kayla Lamonte.

The garden club brought two Bald Cypress trees and a Willow Oak donated by Horticulturist Allen Owings from Bracey’s Nursery. Before they ventured outside Mrs. Howell educated her students about Arbor Day so they wouldn’t have to stay out of doors on such a wintry day. The trees will be planted in another section of the campus during a more desirable day.> 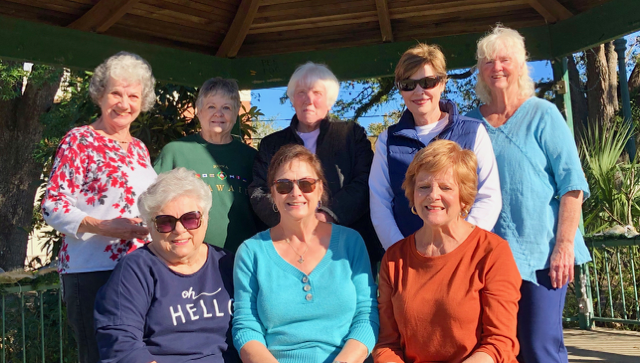 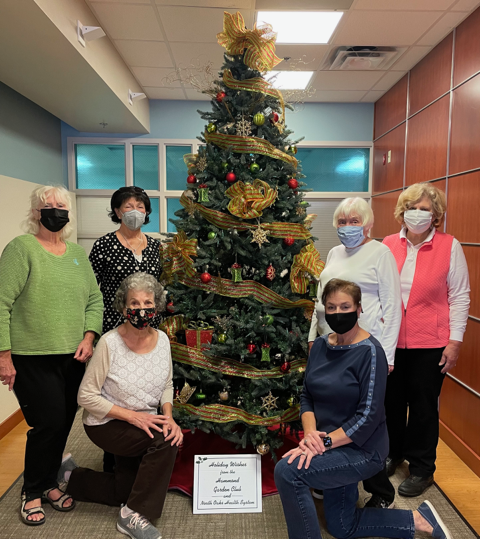 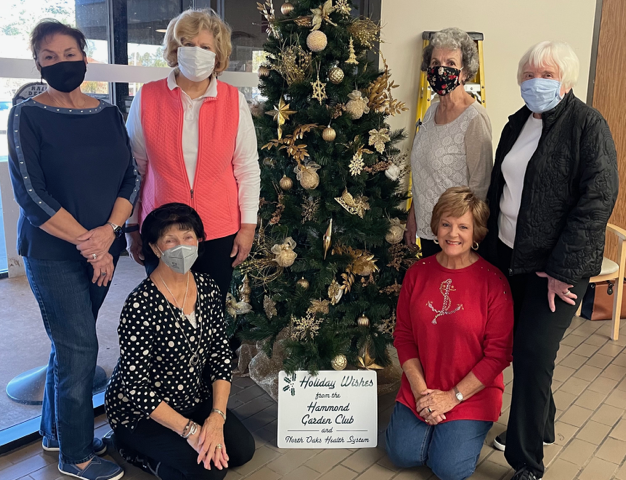 Decorating the tree in the lobby of North Oaks Out Patient Rehab Services from the Hammond Garden Club  are kneeling from left: Phyllis diBenedetto and Sylvia Dileo. Standing from left: Karen Nelson Carolyn Todd, Fran Steib and Sue Parrill. 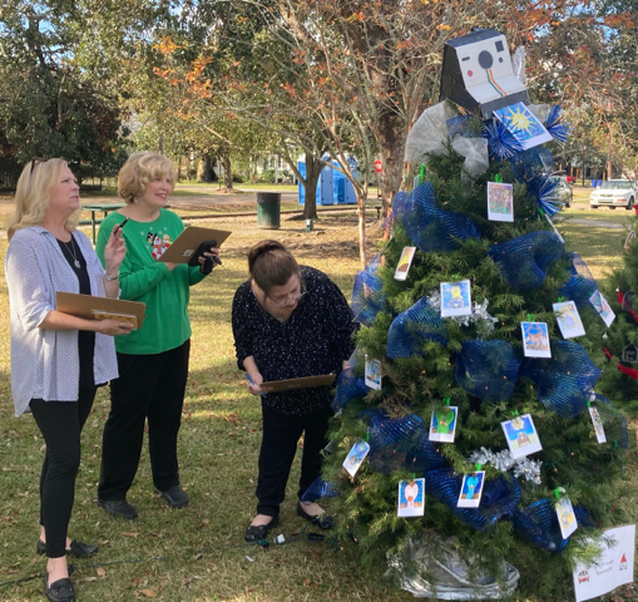 Judging of Christmas trees decorated by seven local schools and one home school, are the members of HGC in search of determining who the winners will eventually be. From left they are Mona Crapanzano, Carolyn Todd and Phyllis Mire. 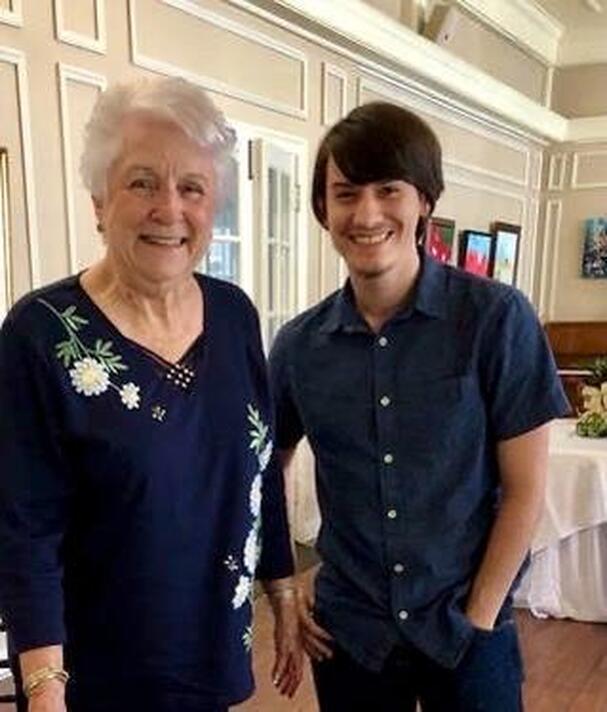 The very best project that the Hammond Garden Club undertakes and makes its members so proud is giving a Southeastern Louisiana University student a
Scholarship Award, money to be able to complete their studies.  Hammond Garden Club member Juanita Pearson introducing the winner of the Annual Scholarship to Caleb Charpentier student at Southeastern Louisiana University. 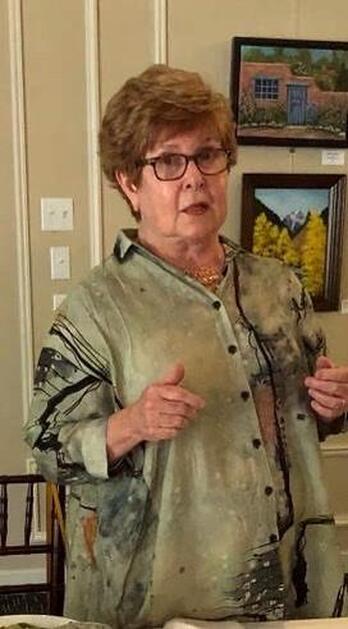 Pat Graves member of the Hammond Garden Club explains to the membership about the potted plantings at the doors of the businesses in the first blocks of Thomas Street in downtown Hammond. 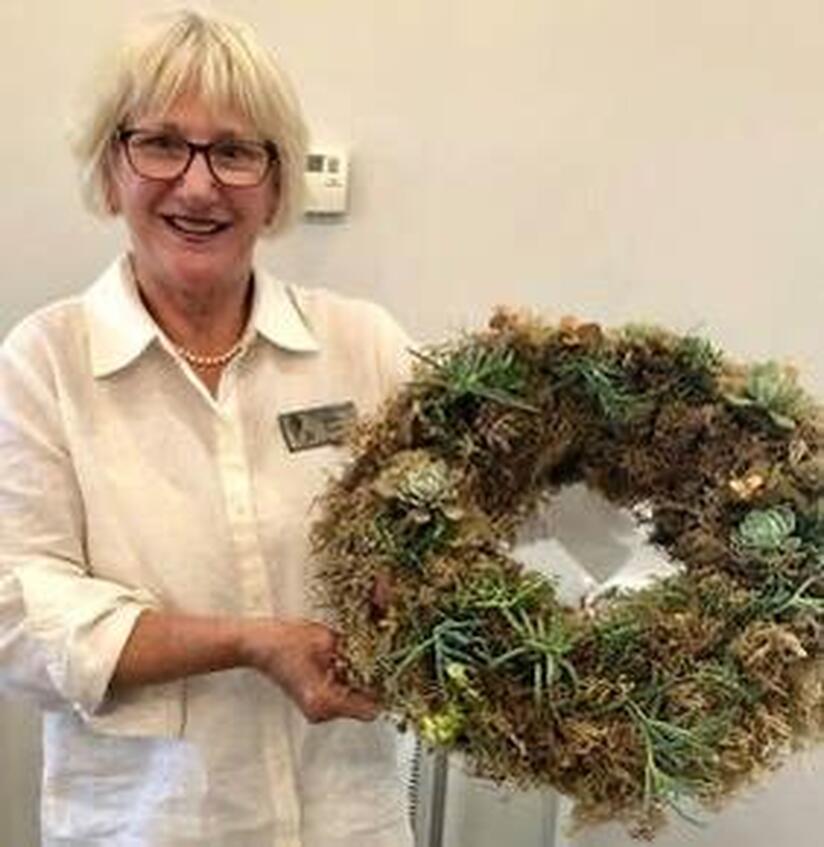 Guest speaker at Hammond Garden Club's November meeting Yvette Cutrer speaking about Living Wreaths and a substance called polymers that are used to plant in ground, in pots and in Living Wreaths that make it half the work, you get healthier, greener plants and reduce watering 30 to 50%.    One of the most informative, captive holding talks by a guest speaker we have ever invited to our meetings! Her business card reads, “Succulent Fanatic Farm Living Wreaths”. 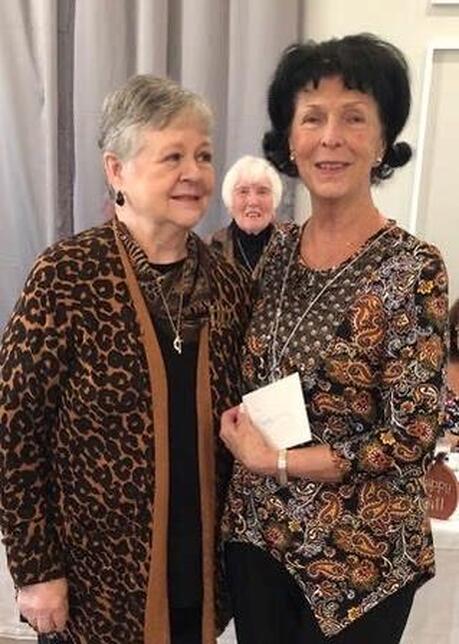 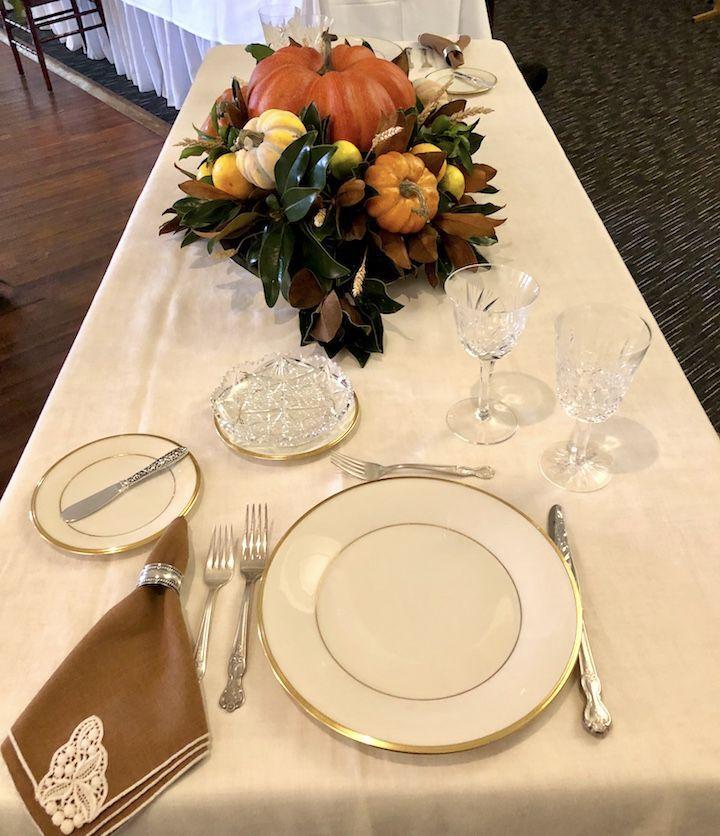 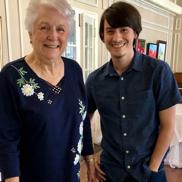 ​The very best project that the Hammond Garden Club undertakes and makes its members so proud is giving a Southeastern Louisiana University student a Scholarship Award, money to be able to complete their studies.Applicants must fill out a form and write a letter describing their needs and the subjects they are undertaking and they must maintain a 3.0 grade point average. 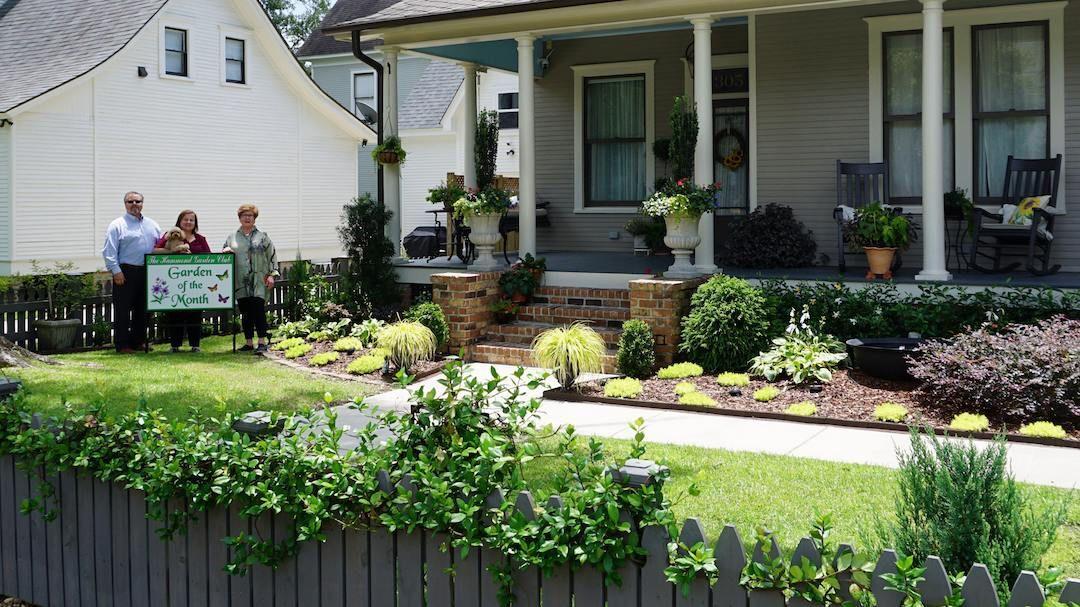 The Hammond Garden Club has awarded the July Garden of the Month to Frank and Cindy Goelz of 305 W. Charles St.

They moved to the Hammond area after Katrina and bought a home on the outskirts of Hammond. Their dream was to eventually move to the downtown area, find an older home and renovate it. They found the perfect home and after several years finally finished and then started on the outside.

Garden club member Pat Graves said, “Once Cindy retired she was able to focus on the yard and her efforts really show with well-maintained flowerbeds as well as pots of flowers leading up the steps.”

​Of note are her year round as well as annual plantings. In the garden are gardenias, japanese yew, hostas, loropetalum, cryptomeria giobosa, lemon coral sedum, carex grass and Holly. 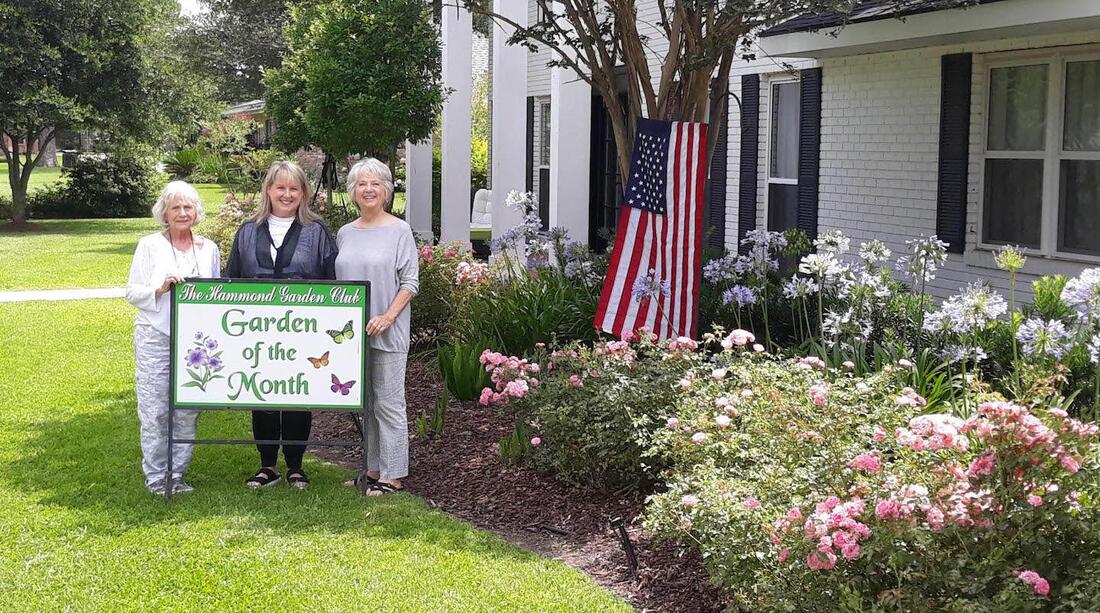 Even with summer heat, drenching rains and high humidity, the gardens in the front of the Scelfo home near Southeastern Louisiana University were colorful, healthy and well-tended.
​
A ring of the doorbell was answered by a surprised and gracious Holly Scelfo who accepted the garden honor and had her photo made with Hammond Garden Club members Sheila Reno, Margaret Hawkins and the official garden club sign.

The Scelfos' garden honor will last until mid-July when other members of the Garden of the Month committee select a new recipient. The award is made throughout the year.

Recommendations for suitable gardens may be made by contacting any Hammond Garden Club member.

Holly mentioned that the yard was overgrown when they moved to Hammond several years ago, but with the help of Angelo’s Landscaping in Baton Rouge, the yard and gardens were tamed and planted. A lush St. Augustine front lawn now frames pink “KnockOut” roses, with height in the gardens from numerous blue agapanthus blooms. Interspersed are foxtail ferns as well as sculpted holly trees at the home entrance. Accents of caladiums and dwarf azaleas add seasonal color under mature crape myrtle and magnolia trees. Head football coach Frank Scelfo and wife Holly are Louisiana natives - he hails from New Iberia, and she from Monroe, so the weather has no more effect on them than it has on the beautiful plantings in the front of their white brick home on University Avenue. 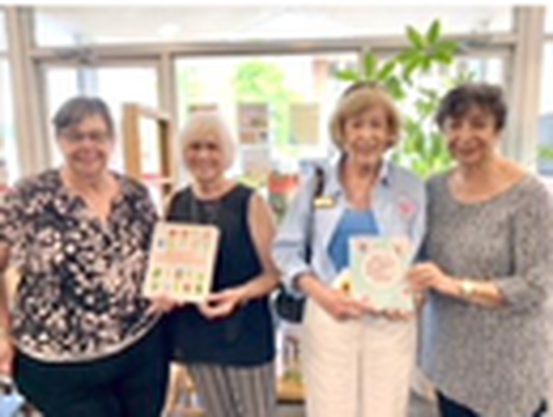 Hammond Branch Library Manager Diana Roedener accepts two books donated by the Hammond Garden Club. Members making the presentation are Shirley Pellichino, Kathleen Bohlanger and Marta Licht. The books are Beginning Gardening Step by Step and How to Attract Birds to Your Garden. 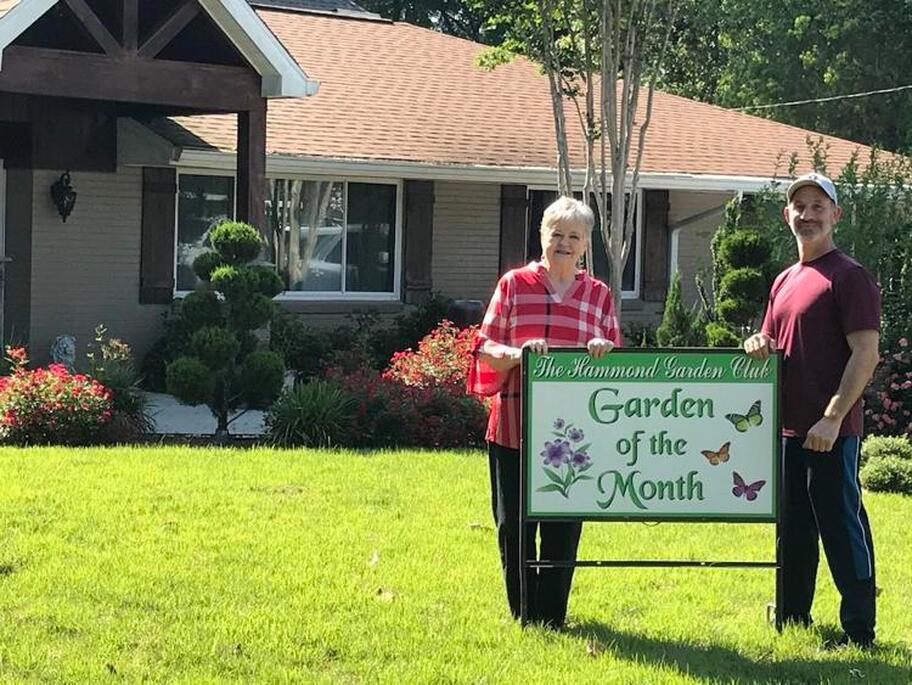 The Hammond Garden Club's Garden of the Month award for May goes to Mr. and Mrs. Sal Durante of 601 N. General Patton, Hammond.
Although the yard is just beginning to bloom into its full glory, one only has to drive down the street to be overwhelmed by the color and design that currently exists.
This amazing home is tucked away on a side street near Southeastern Louisiana University but is worth a sidestep off the main thoroughfare to enjoy a truly beautiful yard. 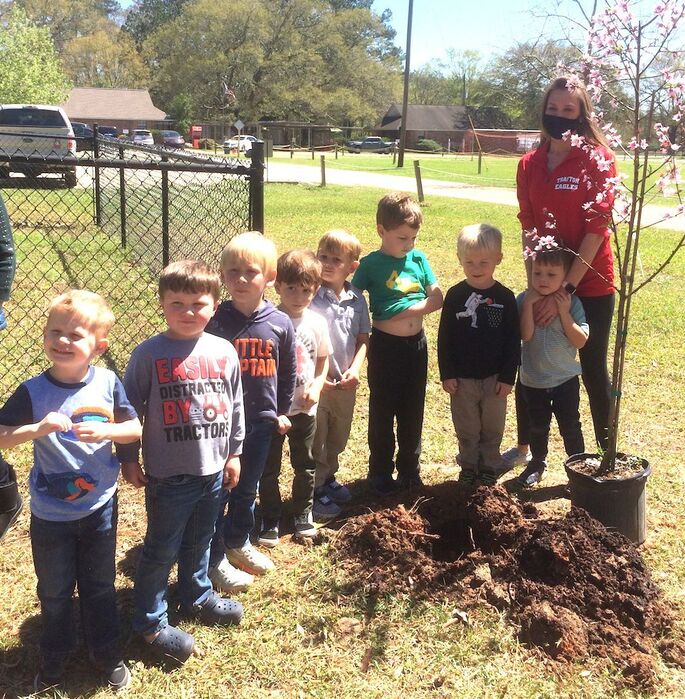 ​Because all things had their proper dates changed due to Covid this year so did the Arbor Day planting for the Hammond Garden Club.
The planting took place in March instead of January, but it was on a beautiful sunny day when President Sue Parrill and Committee Chair Kathleen Bohlinger went to Trafton Academy and met with the Principal Susan Day and her husband who volunteered to dig the holes to plant the trees.
Garden club members also met with Ms. Melissa Parkinson and her preschool precocious little children all excited to see what was about to happen.
Before the celebration, the teacher had told the children about the planting and how the trees were to be taken care of. 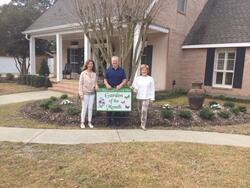 The Garden of the Month for March has been awarded by the Hammond Garden Club to Mike and Judy Miller at 1102 Rue de la Paix in Villa West.

When many yards are showing the ravages of our February freeze, the Millers' yard offers hope for renewal and Spring! Though the Millers' yard certainly was damaged by the cold weather, Mike Miller has worked diligently to restore what was lost.
​
Foundation plantings include white vinca planted beneath two Crepe Myrtle trees that flank the front porch. Dwarf Yupon, Indian Hawthorne and bright pink Azaleas are also in the front beds which continue along the side of the house. 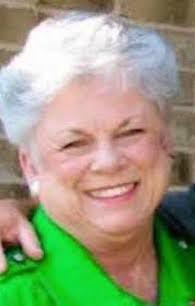 To all the Hammond Garden Club followers and friends, I’m afraid this is probably going to be one of the shortest columns I’ll ever attempt to compose!

I should just start at what was supposed to be our meeting in February which was the joint meeting of all the Area Garden Clubs hosted by the Stem and Stamen Club in Amite, and … like many things because of COVID that were supposed to take place in February, such as parades, Mardi Gras, parties with lots of King Cakes, etc., etc., their meeting was cancelled!
​
Well in our yearbook for February was THAT meeting; therefore we had to hurriedly come up with something or not get together at all. Too late to get a speaker and so it was decided at our board meeting that we would have a plant exchange, meaning each member would bring a plant, a number would be assigned to it, if it was your plant you gave a short talk on the correct name and how to care for it. Whatever member had the number on it got that plant.
​
There were some really pretty plants, some unusual ones also, some colorful … some well … green, including mine which was a Fluffy, Puffy fern! What can I say? It’s Winter! Plants don’t like Winter!
So that didn’t last too long because only 18 members could attend … again due to weather conditions, illness. No one had COVID, just quarantined in case! Hopefully there won’t be too many more columns I can blame on COVID! Hurry, Spring, HURRY!
One home quarantined member was our President Sue Parrill. Our very competent Vice President Karen Nelson took her place; she had an agenda and everything went off like a well-oiled machine!